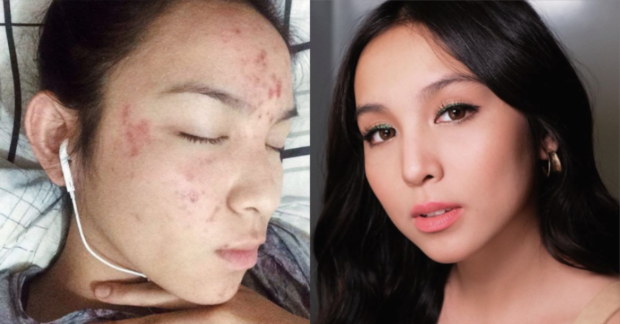 As celebrities put on a facade of perfection, Kyline Alcantara chose to open up about her skin problems and talk about self-love.  Image: Instagram/@itskylinealcantara

While the public has grown used to seeing actors and actresses look polished and perfect in public, teen actress Kyline Alcantara chose to reveal her skin problems.

Alcantara, 17, posted on Instagram yesterday, Oct. 7, pictures of her with no makeup on, baring her cheeks and forehead marked with acne.

She said that the breakout started with one pimple in March last year. By the last quarter of 2018, her entire face had zits.

Alcantara confessed that she would cry before showbiz commitments because she didn’t know how to face people. She felt the pressure from people expecting her to be at her best and to look perfect.

“[T]o look like the polished girl that they always see in TV and magazines, but you can’t even look at yourself in the mirror,” she said.

Covering up her face with makeup also got her criticism: “I was judged, I was bashed and bullied for putting [on] too much make-up.”

Initially, she relied on skincare routines featured on YouTube to address her skin problems, but to no avail. She then consulted a specialist who told her that her skin was sensitive to the products featured in such routines, and that the breakout was also part of puberty.

She explained that she was sharing her experience so people can be less hard on themselves in trying to become perfect.

“Don’t stress yourself over something to be perfect because it will not come. Accept your uniqueness and use it to your own advantage and represent yourself proudly [through] it,” she advised. “Love the imperfectly perfect you.”

“My skin is fine now. I surpassed the breakout stage, and if I can syempre ikaw din (of course you can too)!”

At her young age, Alcantara wowed in teleserye “Kambal Karibal,” which ran from 2017 to 2018. She starred in the 2019 drama musical series “Inagaw na Bituin.” RA/JB

Kris Aquino: ‘God is fair—I’ve never had a breakout’

Social stigma surrounding acne could be lowering well-being for sufferers

Don’t miss out on the latest news and information.

The Best Face Washes To Keep Your Skin Clean, Clear, and...

Tips For How To Deal With Stress During Your Quarter-Life Crisis...

I am stressing about exams and having panic attacks and don’t...