The heartbroken family of a teenager who died from an asthma attack say their daughter is another victim of the unrelenting bushfires.

Courtney Partridge-McLennan, 19, died at her parents’ home in Glen Innes, New South Wales, where blazes have been raging since September.

She lived in a granny flat in the backyard of the family home when she suffered an asthma attack and died in the night.

Her horrified family found her body the next morning on November 29, according to the Daily Telegraph. 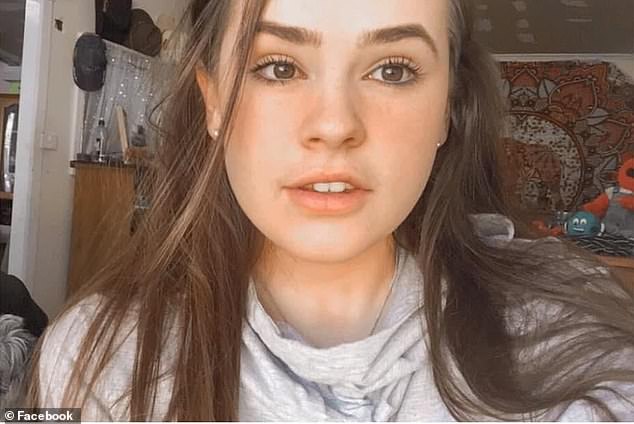 Courtney Partridge-McLennan, 19, (pictured) died at her parent’s home in Glen Innes, where blazes have been raging in September 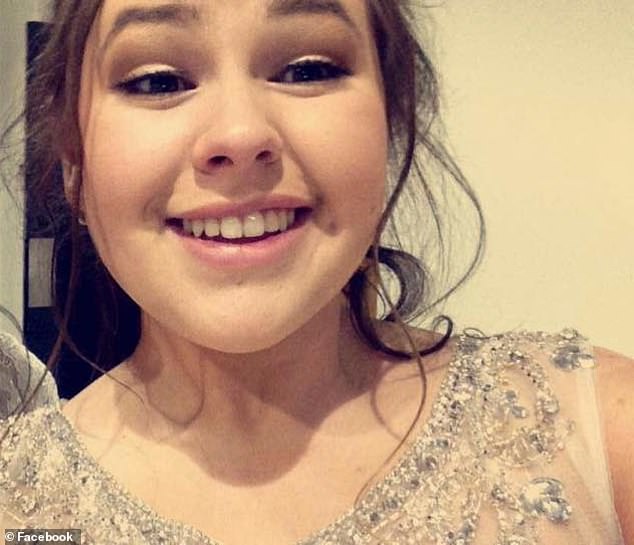 Courtney (pictured) was passionate about young people and hoped to study youth work, already dedicating much of her time to youth camps 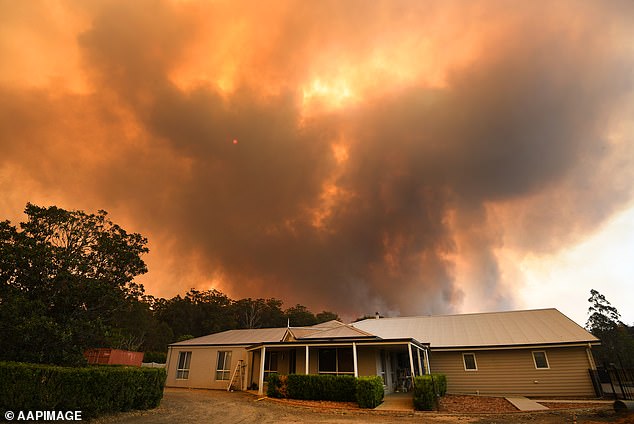 Smoke is seen pouring into the sky from a bushfire outside Nana Glen (pictured), near Coffs Harbour, just two hours from Courtney’s house back in November – just weeks before her death

One of six children, she had suffered with asthma all her life – but never severely, and was always able to control the condition.

‘I don’t want to take away from victims on the frontline, but death by poor air quality needs to be known,’ her sister Cherylleigh, 27, said.

‘She was not a severe asthmatic. Mum and Dad are lost but they want other families to read this and take extra steps for asthmatics.’

Police told Courtney’s family the built-in torch on her phone was on and her ventolin medication was nearby, indicating her death was very sudden. 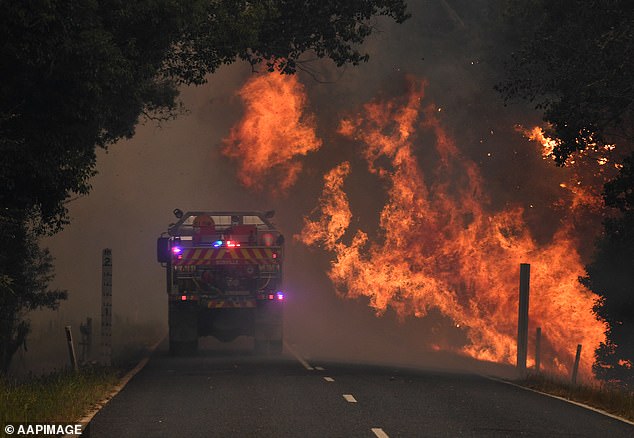 A fire truck is seen near a bushfire (pictured) in Nana Glen, near Coffs Harbour, just hours from Courtney’s home back in November 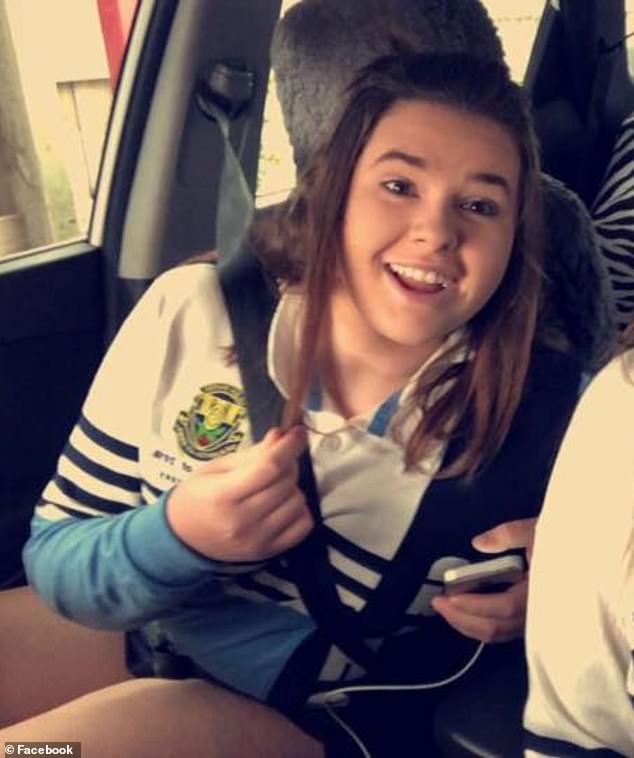 Courtney (pictured) had suffered with asthma all her life, but it was not severe and she was always able to control it 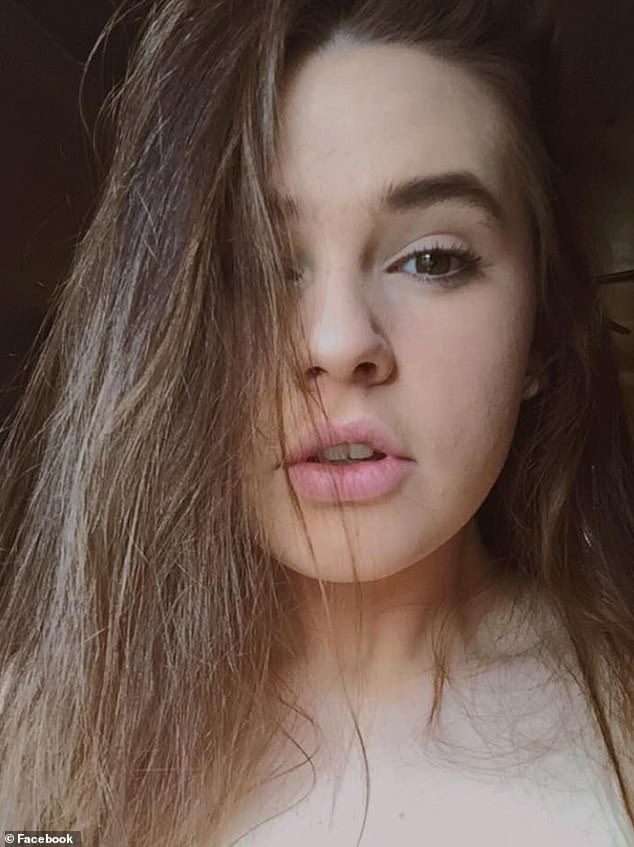 The teenager had hoped to study youth work and dedicated her time to working with young people at leadership camps.

‘That night the smoke came in so heavy you could not even see the hospital across the road,’ her sister added.

It comes as the CEO of Asthma Australia warned more lives will be lost.

‘It is something we would like to focus on to better understand the number of people who have lost their lives due to respiratory issues triggered by the bush fires,’ Michele Goldman said.

The raging bushfires near Glen Innes killed three people back in November, and left the town covered in thick smoke.

Within 50km of the besieged area, there are still four fires burning. 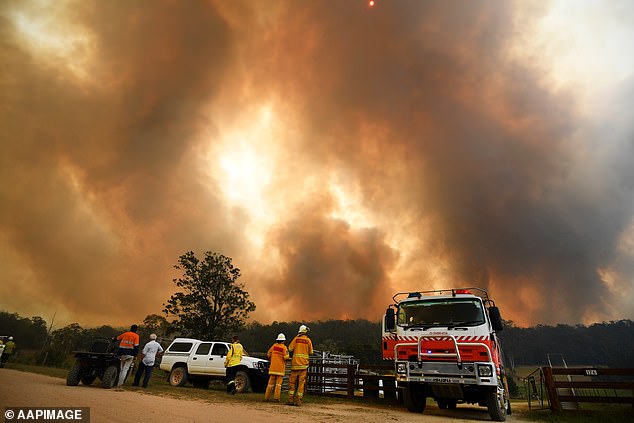 Smoke from a large bushfire is seen pouring into the air outside Nana Glen, near Coffs Harbour, (pictured) just weeks before Courtney’s death

Keeping safe in the smoke

Children, the elderly and people with heart and lung conditions are most at risk.

To minimise the risk to your health, there are some steps you can take.

– Remain indoors with the windows closed

– Preferably stay in an air-conditioned building

– Cover your nose and mouth with a mask or damp cloth to reduce exposure to dust particles.

– Wear a P2 or P3 mask, which blocks even the finest particles if fitted correctly over the nose and mouth

On January 2, an elderly woman died after getting off a Qantas flight in Canberra which is shrouded in toxic smoke from bushfires.

She went into distress while exiting the plane onto the tarmac which was thick with smoke.

Air quality in the capital has recently been ranked by a global air quality index as worse than New Delhi, India or Lahore, Pakistan.

Between December 22 and January 8, the NSW ambulance service received a worrying 3,685 call-outs for breathing conditions, up by 16 per cent on last year.

Air quality in some areas, including Sydney, has reached such critical levels that breathing it is the equivalent of smoking an entire pack of cigarettes. 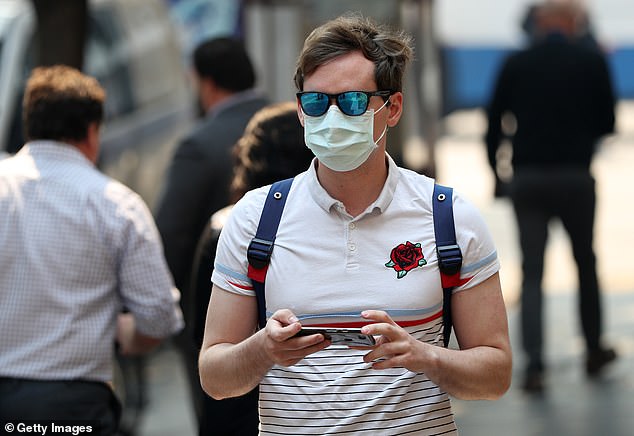 Wearing hardware masks (pictured, on a man in Sydney) can block even the smallest particles from entering your nose and mouth. PM2.5 particles can enter the lungs of animals or humans 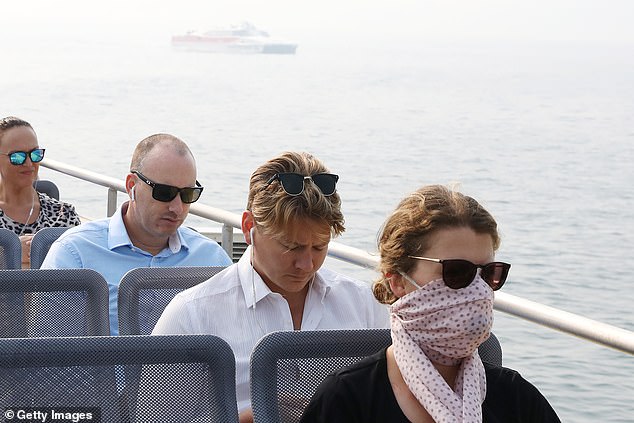 Hazardous conditions created by the raging bushfires have left Australians breathing in dangerous levels of smoke, with some particles small enough to enter the lungs.

Data from the NSW Environment Department show levels of PM2.5 – a particle so fine that humans inhale it into their bodies – has often reached ‘hazardous’ levels.

This is the worst classification of air pollution, and poses an immediate risk to health.

At these levels, all residents should significantly reduce time outdoors, while sensitive groups such as the elderly, children or those with heart or lung problems, should avoid outdoor activity all together. 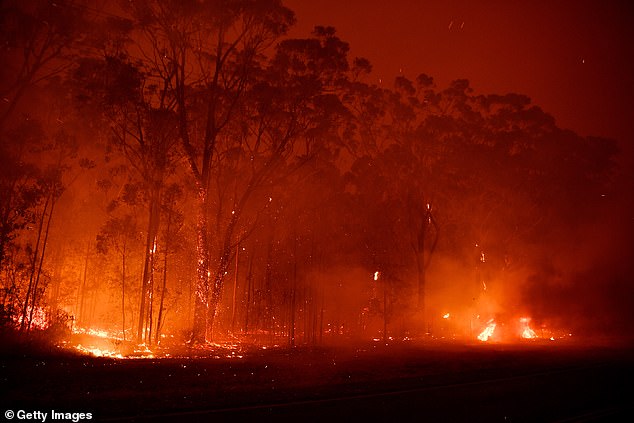 Fires burn in the town of Sussex Inlet, NSW, on New Year’s Eve, as nearly 2,000 firefighters continue to battle blazes across NSW

AUSTRALIA’S BUSHFIRE CRISIS – WHAT YOU NEED TO KNOW

Evacuations are underway and emergency alerts are in place in NSW, Victoria and South Australia as authorities predict the devastating bushfires will continue burning until at least March.

At least 26 people have been killed in blazes across the country since the bushfire season began in October.

Medwatch: Oklahoma could have more asthma triggers than some other states – KSWO

Boy, 3, died suffering severe asthma attack at home despite never having one before

Despite human rights violation, US releases $1.3 billion in aid to...

Thousands with severe asthma NOT getting life-saving treatment they need –...

Anxiety-induced hyperalgesia in female rats is mediated by cholecystok