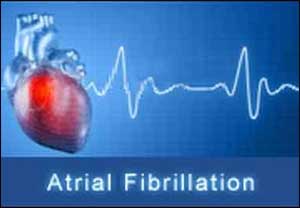 Delhi: Patients with moderate to severe atopic dermatitis have a 20% increased long-term risk of atrial fibrillation, according to a 35 year-long study. The study further adds that the absolute risk, however, remains low.

Results of the study are published in the Journal of the American Academy of Dermatology.

Atrial fibrillation, or AFib, is an irregular and rapid heart rate that increases risk of stroke, heart failure, and other complications. There is no cure for AFib, and while medications and procedures can often help, they are not always successful.

The researchers identified 13,126 persons with atopic dermatitis and 124,211 comparators using linked population-based Danish registries from 1977–2013. The cohorts were followed until death, emigration, atrial fibrillation diagnosis or until 2013. Cox regression was used to compare the 35-year risk of atrial fibrillation and estimated hazard ratios, after adjusting for birth year and sex. 100 atopic dermatitis diagnoses were validated from a dermatological department through medical record review.

“There were no substantial changes in estimates when analyzing with delayed entry or when using phototherapy as a proxy for severe atopic dermatitis in addition to other systematic therapies and admissions,” Schmidt and colleagues wrote.

“Patients with hospital-diagnosed atopic dermatitis have a 20% increased long-term risk of atrial fibrillation, but the absolute risk remains low,” they concluded.

PGI coming up with mobile app to monitor asthma : The...

How To Ease Panic Attacks While Traveling Alone, According To A...

Skin experts reveal why face masks are causing acne – and...

Tom Farley shares addiction signs to look for in loved ones...